Recently, on the Six String Bliss forum, there was a discussion about using a Behringer FCB1010 MIDI footpedal to control Reaper. It struck me as a great idea but a bit excessive to be spending in the region of £100-150 on something for this relatively minor convenience. My natural instinct, when faced with something cool that I can’t justify buying, is to work out whether I can hack something together on the cheap.

After plenty of research, the route I chose was to buy an old USB gamepad, a footswitch enclosure which was pre-fitted with four momentary (non-latching) footswitches. The main inspiration for this was this post on the Reaper forum.

The gamepad provides a USB interface connected up to a couple of potentiometers and a bunch of switches. Initially I was only interested in the gamepad’s switches but I may come back to the potentiometers later, if I can think of a good use for them, such as controlling the volume and L/R balance of the active track. 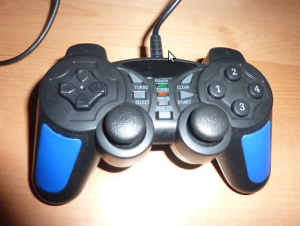 Including postage, the gamepad cost me £5.25 (incl postage). The footswitch enclosure, was a Seymour Duncan controller for a KTG amp. This cost me £16.00 (incl postage). I was lucky enough to find that the four existing footswitches were of the type I required and so I could reuse them. If this hadn’t been the case, a job lot of six footswitches would have cost £16.50.

Reaper can accept the joystick/gamepad input directly and has the macro-like concept of being able to string together a bunch of commands into a single action.

The things I wanted to be able to control with the footswitch were:

After gathering all of the parts and tools together what I did was:

And here’s the end result.

Not very pretty but it works like a dream.

In the course of my research I also found that I could potentially use these footswitches to perform other, non-DAW related actions. A program called “xpadder” allows you to map gamepad actions to generate keystrokes. Some of the initial ideas that spring to mind are:

I’d be interested to hear of any other suggestions that you can come up with.

In the next post I’ll go through the Reaper configuration steps in more detail.

One thought on “Hacking a USB footswitch”

Should you be so inclined, you can find me on Twitter and Google+.